Hollywood is known for his menacing stares and long pauses before rendering his verdict (the expressions on the bakers’ faces are a study in terror), while Berry and Leith are kinder, though no less exacting in their standards. Hollywood also likes to lurk while bakers are working (which 2012 contestant Cathryn Dresser called “really unnerving”). Said 2019 baker Henry Bird of Hollywood: “It’s the eyes. Like a shark. Only even less mercy.”

Hollywood has been known to declare some bakers’ efforts tasteless or inedible. But, when he really likes something, he awards the contestant one of his much prized handshakes, and their faces light up like a child on Christmas morning. 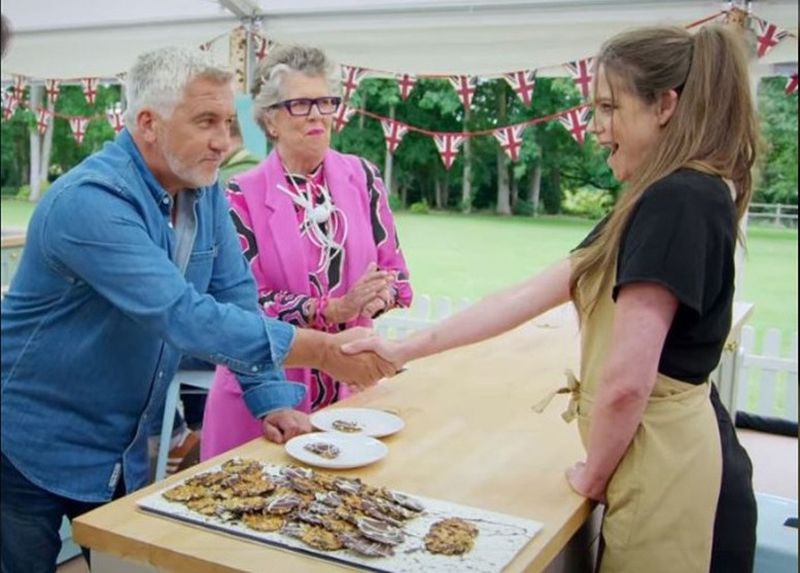 Baker Lottie Bedlow gets one of the coveted Paul Hollywood handshakes during the 2020 “Great British Baking Show,” which saw the contestants all living in a pandemic bubble. (Courtesy of Netflix)

An evolving cast of cheeky but charming comic duos host the show, describing what’s going on, and acting as timekeepers and cheerleaders/confessors for the frequently harried bakers, who are known on the show only by their first name. More than 10,000 apply each season for one of the 12 or 13 spots on the show, and those selected are a pretty diverse lot.

Watching, you get invested in pulling for your favorites. Mine have included a pair of winners — Candice Brown, a spunky P.E. teacher known for wearing a different shade of lipstick every day, and Rahul Mandal, a milk-drinking Indian immigrant who triumphed despite a total lack of self-confidence — as well as adorable quarterfinalist Martha Collison, the youngest-ever contestant at age 17. (The oldest winner so far was the unflappable, 60-year-old Nancy Birtwhistle.) 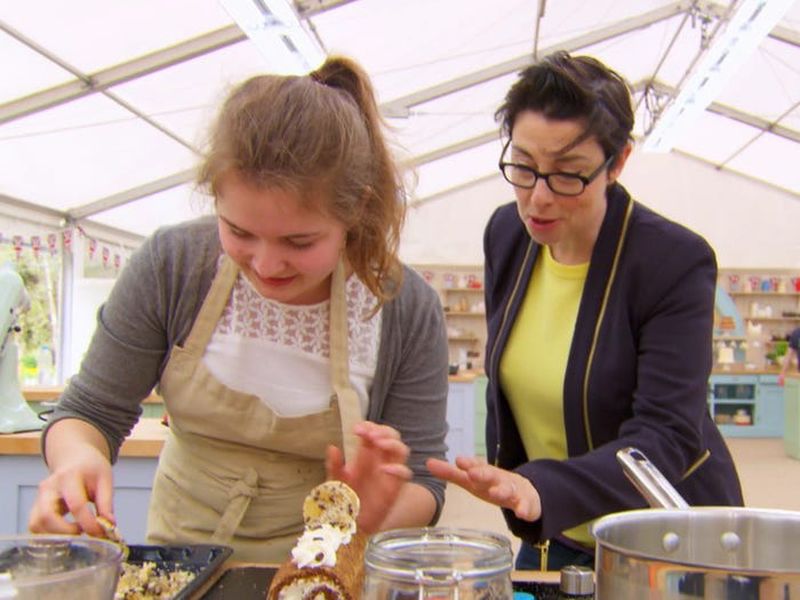 Quarterfinalist Martha Collison (left), seen with co-host Sue Perkins, was 17 when she competed on “The Great British Baking Show,” making her the youngest ever of the show’s bakers. (Courtesy of BBC)

Each season runs 10 episodes, with one contestant named “star baker” each week, and another eliminated, until the three finalists face off. And, fortunes can turn on a dime, with contestants talking of “the curse of star baker.” 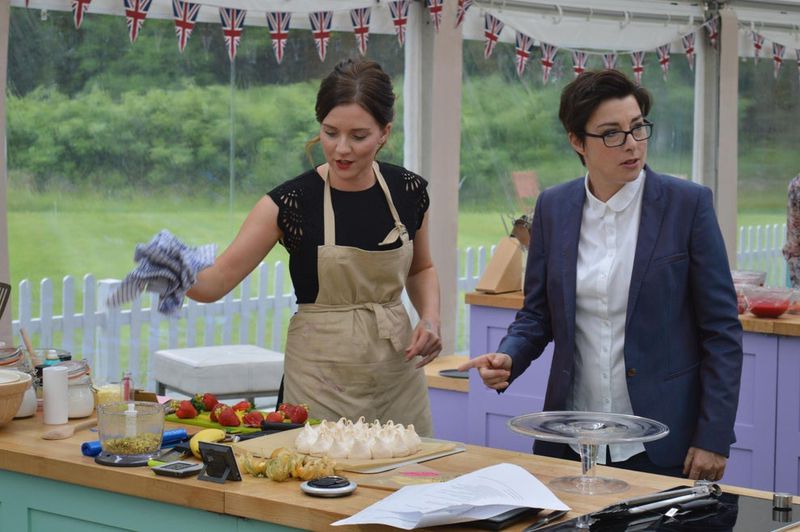 Each episode consists of three time-limited challenges (“On your marks, get set, bake!”), two of which they have practiced for at home. However, the middle “technical challenge” is one where they have no idea what they’re going to be asked to bake. These can range from relatively straightforward cakes, breads, pies and “biscuits” (as the British call cookies) to obscure foreign dishes, or something from the Tudor era that none of the bakers ever has heard of before. For the technical challenges, which are blind-judged, the bakers are provided with a pared-down recipe that omits key details (such as baking time).

The episodes end with “showstoppers” that range from elaborately decorated multitiered cakes to massive gingerbread constructions, or even bread sculptures. One showstopper challenge was to make a picnic fit for the queen, featuring 49 elements, including a chocolate celebration cake, 12 puff pastry sausage rolls, 12 savory scones, 12 mini quiches and 12 custard and fruit tarts — all baked in one oven, in five hours. 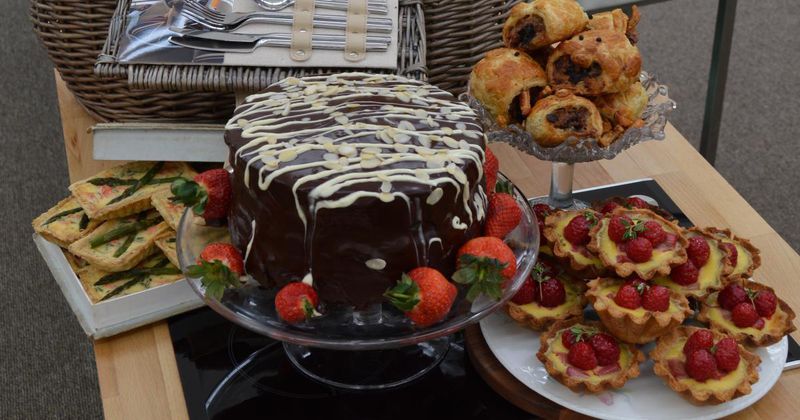 The showstoppers have produced some of the show’s most memorable bakes, including a steam train constructed from cookies, a regal lion’s head made entirely out of bread, and an abandoned Chinese fishing village made of fruitcake, caramel, sticky toffee pudding and spun sugar.

The competition takes place in a large marquee tent in the middle of an idyllic pasture on a British estate, though the 2020 season was shot on the grounds of a manor house-turned-hotel, so everyone involved could be kept quarantined for the duration inside a “bubble.” Temperatures inside the tent sometimes top 100 degrees, making concoctions involving freezing especially tricky. One of the most memorable “Great British Baking Show” creations was the lion’s head made out of bread by 2014 quarterfinalist Paul Jagger. (Courtesy of BBC)

Somehow, “Baking Show” manages to be both quintessentially British and universal. (In the U.K., it’s known as “The Great British Bake Off,” but the name is changed in the U.S., where Pillsbury owns the rights to “Bake Off.”)

My millennial daughter, son and daughter-in-law all started watching it before me. I’ve now seen all the series at least once, and a few of them several times. They hold up well to repeated viewings.

In Britain, the show is a really big deal, with lots of media coverage. Young Martha told the London Sun that, being on the show, you become a national treasure, “just by doing it, because everyone in Britain loves the ‘Bake Off’ so much.” In America, there’s a cult fandom on social media. Fans have their favorite winners, favorite contestants and even favorite episodes. 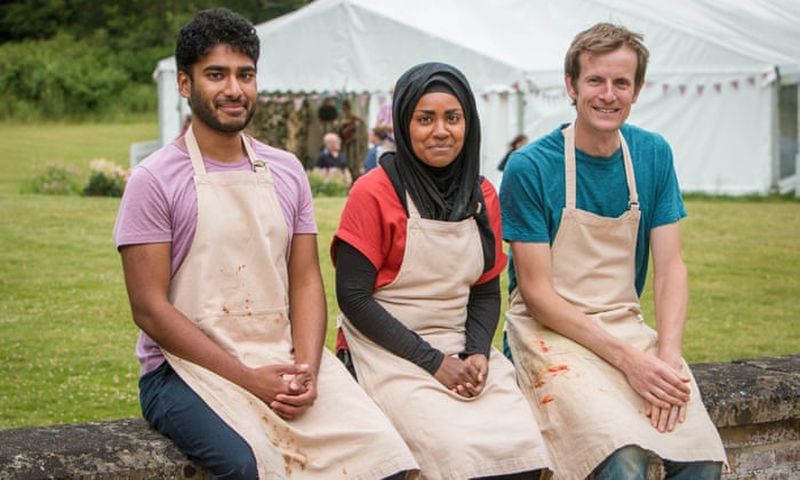 Having begun in 2010 (the first two seasons aren’t available in the U.S.), the show has been around long enough that its most recent winner, 20-year-old Peter Sawkins, started watching it at age 12. “I know 12-year-old Peter would be in awe,” he said after his win.

The order in which you view the various series doesn’t matter, which is a good thing, since the British producers, PBS and Netflix all number them differently. Olivia and I generally refer to seasons in terms of the winner, or a favorite baker, as in “that’s the Candice season” or the “Frances-Ruby season.”

“Baking Show” combines the best of a competition and an instructional cooking show. Mainly, though, it’s just fun viewing, with lots of wry humor, awful foodie puns and the occasional adult double-entendre. Also, unlike American competition shows, there’s none of the backstabbing and cheesy manufactured melodrama. The contestants actually will pitch in and help one another. Sophie Faldo, seen with judges Prue Leith (left) and Paul Hollywood, holds up the crystal cake stand that was her prize for winning the 2017 “Great British Baking Show.” (Courtesy of Channel 4)

Perhaps the biggest difference between “Baking Show” and U.S. competitions is that the bakers who participate are competing … for a crystal cake stand. That’s it! No big bundles of money, just the honor of being declared Britain’s best amateur baker.

In times like these, watching “The Great British Baking Show” is good for the soul. The show has been described as the “friendliest competition series on TV,” and “one of the happiest TV series ever made,” and that’s definitely part of its appeal. Olivia started bingeing it while house- and pet-sitting for friends. “When I don’t have access to cable or satellite,” she said, “I always watch ‘Baking Show,’ because it makes me happy.” 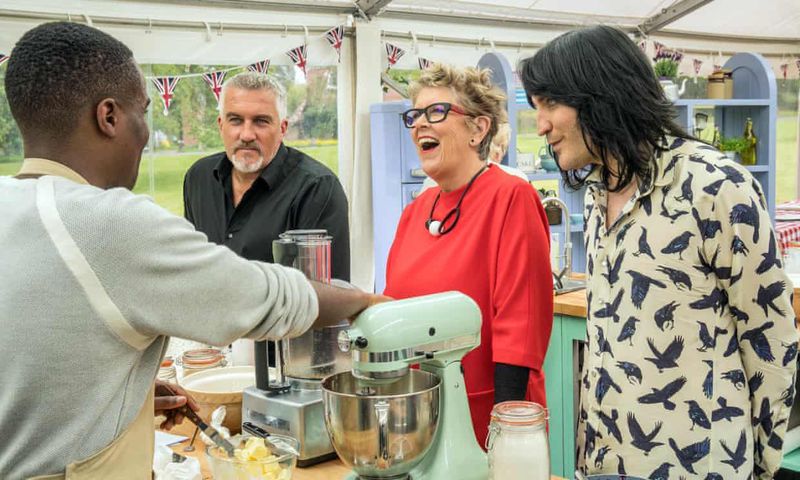 Not that there aren’t moments that tug at the heartstrings. Teenager Martha generally had an irrepressible smile, but after one particularly negative judging, you could see her in the background, her face crumpling in tears. That was tough to watch.

Also, senior citizen Terry Hartill talking about how much he missed his deceased wife, and how baking helped fill the void in his life, is guaranteed to moisten the eyes.

Nadiya, in fact, has been the most successful of the bakers, post-show, hosting three of her own TV series. She also was asked to bake Queen Elizabeth II’s 90th birthday cake.

Quite a few other contestants have had cookbooks published, a couple have opened their own bakeries, and young Martha is now a food columnist. 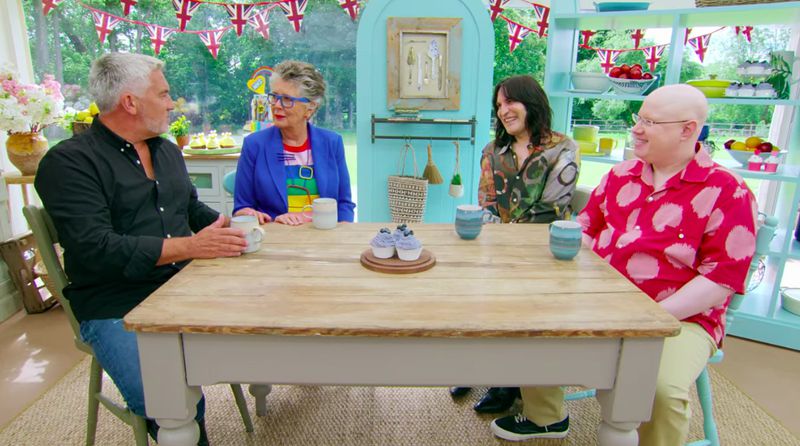 The current cast of “The Great British Baking Show” is (from left) judges Paul Hollywood and Prue Leith and hosts Noel Fielding and Matt Lucas. (Courtesy of Channel 4)

As much as we enjoy just watching the bakers do their thing, you actually do learn while watching the show. I’m not a baker, but I now know the difference between rough puff and puff pastry, and how to avoid the dreaded “soggy bottom” on a pie.

Olivia, who does bake, has picked up quite a few tips from the show. She learned how to use a piping bag, and she now has a collection of baking tools and “Baking Show”-related cookbooks.

A while back, after my daughter had baked another batch of her grandmother’s whole-wheat tea bread, I asked her, “What do you think Paul would say?”

Read more about “The Great British Baking Show” at Bill King’s Quick Cuts blog, billkingquickcuts.wordpress.com. He can be reached at [email protected].