In the 30 years since its UK supermarket debut, pesto has captured Britain’s heart, becoming a go-to saviour of the midweek meal. And not just in the classic pesto alla genovese form. From chilli-spiked to truffled incarnations, pesto has come a long way since 1991.

“Start with the premise that it contains herbs, nuts, cheese and oil,” says George Leigh, chef at the Birmingham pizzeria Otto. “Then pick the herb or cheese and adjust everything else to match.” That attitude will appal purists, but, as this A-Z of pesto reveals, once-hard rules about pesto are increasingly being ignored for the sake of flavour.

General rule: blitzing 250g soft herbs, 50g nuts, 50g hard cheese, one garlic clove and any seasoning, with 150ml to 300ml of oil, should make enough pesto to sauce three or four meals, or dabble with as a condiment. But quantities are a matter of personal taste. Feel free to blend smaller amounts of the ingredients first, and then taste and amend until satisfied. That is the pesto way.

“I’ve been making anchovy ‘pesto’ for 25 years. I love it on sweet roast peppers or bland foods, such as eggs or mozzarella,” says the food writer Diana Henry. Her recipe in Cook Simple (Mitchell Beazley) whizzes up a 50g tin of drained anchovies, one garlic clove, 70g of pine nuts, 100ml olive oil, lemon juice and pepper.

As a testament to pesto’s conceptual versatility, Bristol’s Gambas reinvents it via Spain. To serve four, blanch 170g of broad beans in boiling water for two minutes, skin and pulse them in a food processor, hand-mix that with 2tbsp finely grated manchego, 1tbsp roasted almonds, 10 finely chopped mint leaves, 1tbsp crushed garlic and roughly 150ml of Spanish extra virgin olive oil, salt and lemon juice to taste. “It’s got a texture to it,” says chef Mark Chapman. “We use it with fish or lamb.”

Can you cook with it?

Legally, yes. From pasta bakes to savoury pastries, recipes encouraging just that abound. Most chefs, however, loathe the idea of cooking with and directly heating what they regard as a dressing. “You lose all the subtlety of flavour,” says Si Toft, chef-owner at Abersoch’s Dining Room. “With a tomato stew, you may as well chuck in dried basil and garlic as a more robust way of getting that profile.”

“Pesto punches up flavour. It adds next-level seasoning with minimal effort,” says Kimberley Hernandez, chef at Chiswick’s Silver Birch. But, invariably, that power is deployed by using pesto cold as a garnish, for instance, to top stews and soups, as a salad dressing or mixed with mayo in a chicken sandwich. You can certainly use pesto to augment hot food (“Toss pesto through roast potatoes,” urges Ollie Templeton, exec chef at London’s Carousel), but after they are cooked.

Taste it before you start. Overtly peppery, buttery or grassy oils can unbalance a delicate basil pesto. Milder oils, such as rapeseed, are increasingly used to let the herbs shine.

In terms of preparing classic pesto, there is a standoff between pestle-and-mortar militants and the more pragmatic food processor wing. But Templeton suggests a third way. He machine-blends basil, garlic and oil separately from the parmesan and pine nuts, then folds the two together, correcting it if necessary: “You control the variables. You’re not at the mercy of the blender.”

Home of exceptional basil pesto. “Genoa’s softer, sweeter basil has a DOP classification, and Ligurian olive oil is better as it’s milder than Tuscan,” says Avinash Shashidhara, chef at Fitzrovia’s Pali Hill. Serve such pesto over minestrone or – adding a dash of milk to make it smoother (“not enough to taste it”) – with fazzoletti (or silk handkerchief) pasta, green beans and tiny cubes of potato.

How to dress pasta

Drain the pasta, but retain a few spoonfuls of its starchy cooking water. When you mix the pesto in, it should take on a creamier texture and adhere to the pasta perfectly. Do this off the heat, says chef Pip Lacey, a co-founder of London’s Hicce. “Putting pesto into a hot pan normally ends with cheese sticking to the bottom of the pan and burning; it can result in an oily mess.”

OK, not every chef refuses to cook with pesto. At Otto, Leigh prepares an OTT pesto to add to pizzas (neutral olive oil, double the parmesan and garlic, lemon juice and zest) that is “completely transformed in the oven. The fragrant garlic almost fries and the zest comes alive.” Use that trick to flavour meats or vegetables you are grilling or roasting. “At the end, toss in a punchy pesto and flash them through a very hot oven.”

Lemon juice is the pro chefs’ secret weapon. Used judiciously, a splash of juice or a pinch of zest can inject zippy brightness into everything from a spag bol to the many varieties of fresh pesto.

Ligurian trofie (little twists) and trenette (marginally wider linguine), are frequently touted as the definitive pastas for pesto. But linguine is the convenient supermarket compromise.

Purists regard it as sacrilege to chop basil, insisting pesto’s ingredients should be gently pounded into submission. The ultra-fastidious insist on a wooden pestle and marble mortar.

Pestos made with green vegetables such as blanched spinach and peas (equal thirds by weight with the basil) can lack “punch”, says Leigh. The solution? “Blitz in a handful of green olives. I like that on pasta, but you could use it as a veggie pizza base.”

Provence’s simplified take on pesto: a cheese- and nut-free blast of basil and garlic.

Every detail of classic Genovese pesto, from pestle-v-food processor to blanching the basil to keep it verdantly green, is disputed. Free your mind, urges Leigh: “Ultimately, how pesto tastes should override any rules, which are often contradictory, depending on whom you consult.”

Created in Trapani and traditionally served with busiate pasta, this pesto exploits Sicily’s abundance of awesome tomatoes. To make 200g, blend 50g of sun-dried tomatoes, 10g basil, 30g each of toasted almonds and pecorino, 20g of cherry tomatoes and a half-clove of garlic with oil. “It’s great on bruschetta,” says Emilia Strazzanti, from the online deli strazzanti.co. She tops oiled and salted, grilled sourdough with pesto Trapanese, basil and mozzarella. “We also love it mixed through fresh tomatoes and served with creamy burrata.”

Lightly toast the nuts to intensify their flavour. Do not burn them or the pesto will be bitter.

“Change the cheese, the nuts, the herbs. Experiment!” urges Chris Leach, chef at London’s Manteca, a person who has previously served rigatoni with pumpkin seed and anchovy chilli pesto; 100g of seeds, one garlic clove, five anchovies, 20g parsley and a pinch of chilli flakes should, with sufficient oil, make enough for four portions. Finish the pasta with hard ricotta salata. Any soft herbs and small-leaf greens, from lovage to watercress, can be employed to shake up pesto. Andrew Green, chef at Manchester’s Ducie Street Warehouse, suggests a “peppery” 50-50 rocket-basil mix. Alternatively: “Swap leaves for roasted yellow peppers. Play around with the principle.”

In season, a prized replacement for basil. It creates a powerfully garlicky, well-rounded pesto. Blend with sweeter cashews to take the edge off wild garlic’s bitterness.

Like bamboo fibre and potato starch, a sometime pesto thickener that is likely to provoke fury in Italy.

Nutritional yeast (about two tablespoons to 150g of basil) is used to mimic parmesan in cheese-free vegan pesto. But, advises Pam Yung, chef at London’s Flor, you can also play around “with ingredients that lend body and deep umami, such as miso or sun-dried tomato paste”. 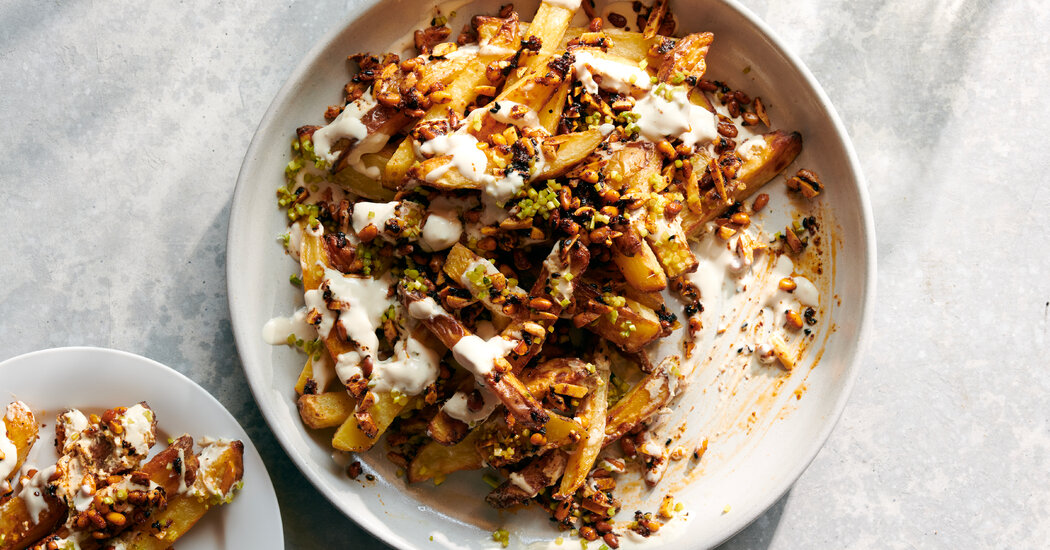